Fixed vs. Variable Rate Mortgage Which is Best?!?

You are here: Home1 / Blog2 / The Place to Mortgage: Alberta3 / Fixed vs. Variable Rate Mortgage Which is Best?!? 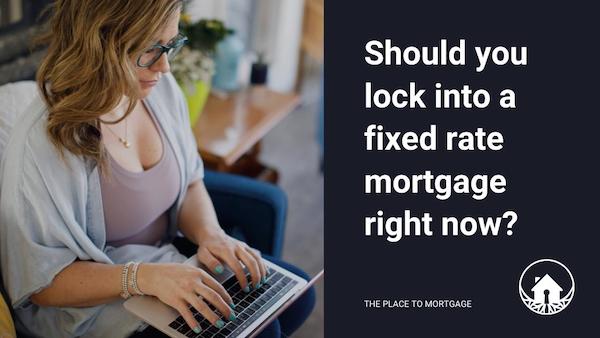 There has been a lot of recent talk about interest rates; fixed rates are increasing quickly, yet prime rate is holding steady for now, despite high speculation it will also begin to increase.  I believe there are most definitely some prime rate increases on the horizon, but with the spread between variable rates and fixed rates currently being over 1%, we still are encouraging the variable rate option for many of our clients entering new mortgages.  Further, depending on the current variable rate of course, we are also not hastily recommending that our existing clients lock into a fixed rate at this time.

Yes, inflation is high, but likely because of the “bottle neck” effect on commodities as a result of the global pandemic. There is an expectation that this pressure will ease off by the end of 2022, and that inflation will begin to normalize at that time as well.  As a result of the current economic conditions, we can expect to see an increase in prime rate (and in turn variable rates) a bit sooner than initially predicted, but with current variable rate being offered at prime rate less at least 1%, we would have to see 4 prime rate increases for the variable rates to be on par with today’s fixed rates.

Some quick math for you:

A $400,000 mortgage at variable rate of prime rate less 1.3% will have a monthly payment of $1534.  The same mortgage at a today’s fixed rates would come in at $1750 per month – $216 more per month! Of course, if you are in a variable rate you do have to expect your rate to increase during your mortgage term.  So, let’s say the variable rate increased a full 1% (historically this means 4 increases).  Your monthly payment would move to $1722 per month, meaning prime rate would have to increase MORE than 4 times to even come on par with what the fixed rate payment is, PLUS you must consider the savings you had during the entire portion of your term before the increases were applied.

If you are in a current variable rate mortgage, your rate may not be quite as low as prime rate less 1.3%.  We are seeing many borrowers currently paying prime rate less 0.5-0.75%, which means that they are likely about 2-3 years into their current term, and we’ve done that math as well! If those borrowers were to lock in now, they would be locking into a rate higher than they are currently paying, resulting in them coming close to breaking even by the end of 2022.  However, instead of locking into a fixed rate now, the math seems to be much more favorable for them to re-negotiate their current variable rate and start fresh with a new 5-year variable at today’s prime less 1.3%.

Another very valid benefit to a variable rate mortgage is that the penalty to break the term is considerably lower than that of a fixed. I have this video I have been sharing from my favorite mortgage mogul Dustan Woodhouse who explains it so well.  It’s worth the watch and I have attached it here. https://vimeo.com/279581066

Another article that explains more of what is going on can be found here: https://www.mpamag.com/ca/mortgage-industry/market-updates/bank-of-canada-announces-latest-overnight-rate-target/314567

In summary, I recommend staying the course.  Paying less interest now means more going towards your principal. I’m very pro variable (I’m personally in a variable rate mortgage and don’t have plans to lock in anytime soon). I will (and have in the past) reach out to my variable rate clients if I think that locking in is worth considering, although I do think when we enter a variable rate mortgage, we essentially just need to ‘ride the wave’. I have clients that locked into a fixed rate a few years ago, before COVID, and before rates plummeted… and now they regret locking in.

If you are interested in locking in, today’s 5-year fixed rates are at about the mid 2% range, and I’d be happy to investigate some payment amounts for you. Another option to consider would be to keep your current variable rate montage as it is, and simply increase your current payment to match what the fixed rate payment would be. That way for now while prime rate is still now, you would be paying extra towards your principal amount, and as time goes on and prime rate increases, the amount to principal and interest simply gets adjusted accordingly.

Navigating this world of fixed, variable, prime, inflation, bonds, yields etc. etc. is certainly overwhelming.  Please call me if you would like to chat about your individual situation in more detail.

*Rates are based on best rates available now, and are subject to qualifying, mortgage product and equity in home.

***The Bank of Canada meets 8 times a year to discuss an adjustment to the prime rate.  Most times they remain steady and occasionally they make a change.  Here are the historic changes since 2010, for your reference. 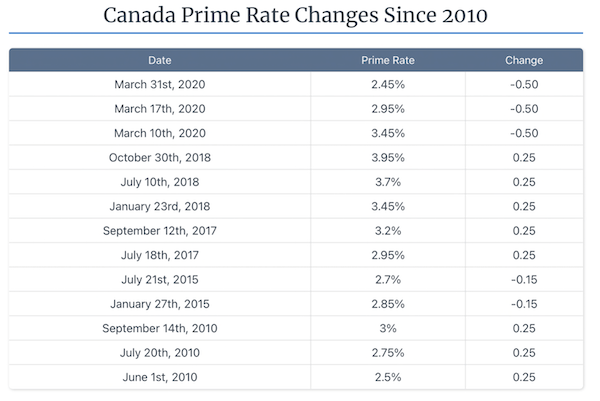 No Frills Mortgage
Scroll to top
APPLY OVER THE PHONE